There are as many as 26 protected cultural monuments in the old town of Motovun, which is why this medieval town is on the UNESCO World Heritage tentative list. Visit Motovun and discover the richness of cultural and historical heritage that the medieval jewel of the interior of Istria is proud of! 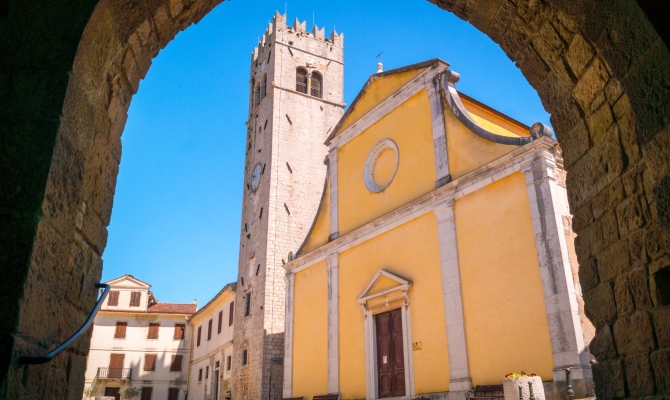 The parish church of St. Stephen was erected in place of an older church which was, in its turn, erected most probably on the foundations of an antique basilica. The legend says that margrave Engelbert of Istria and his wife countess Matilda were buried in the older church. The present-day church of St. Stephen was built between 1580 and 1614, obtaining its current shape at the end of the 18th century. Owing to the mannerist elements of its façade, it has been considered that it was built following the designs of the famous Venetian architect Andrea Palladio.

The bell tower of Motovun, a landmark dominating over the entire landscape of the middle Mirna valley, is 27 meters high and was built in the 13th century as the town’s main tower and observation post. Over the centuries it was refurbished on various occasions to be finally converted into a bell tower. The reconstructions are witnessed by inscriptions on its walls, while the reconstruction under the Podestà Giacomo Zeno was evidenced by an inscription carrying his coat of arms. 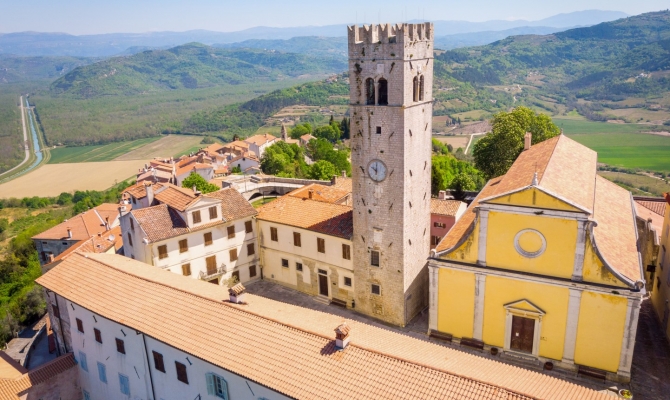 The earliest preserved Motovun walls date back to the 11th and 12th centuries when tall and mighty bulwarks fortified with towers were built. The main bulwark was further fortified in the 12th and 13th centuries. At the beginning of the 15th century Motovun had already received its shape of Gothic stronghold with a new town gate. In the 16th century the bulwarks were additionally fortified and the Servite convent was added to the fortification system along with a new bastion. In the 17th century a part of the walls was pulled down to satisfy the peace treaty between Austria and Venice.

The Municipal Palace was mostly built in the 13th century when, apart from its public function as a town hall, it was also an important piece in the town defence system. The Motovun Municipal palace is the best preserved Romanesque public building in Istria and Croatia. Despite numerous building modifications made through the centuries, its western façade still features the original Romanesque bifore (mullioned windows with two lights). 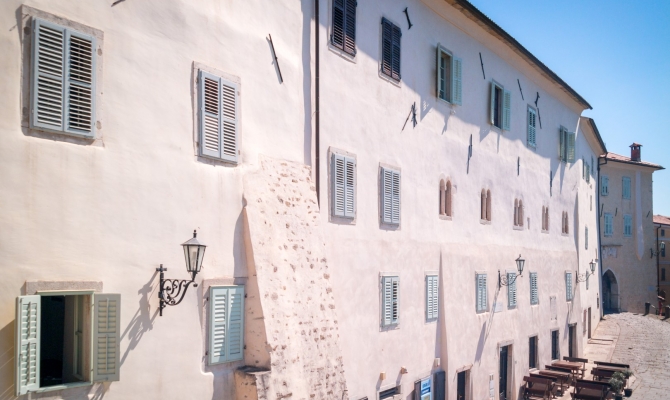 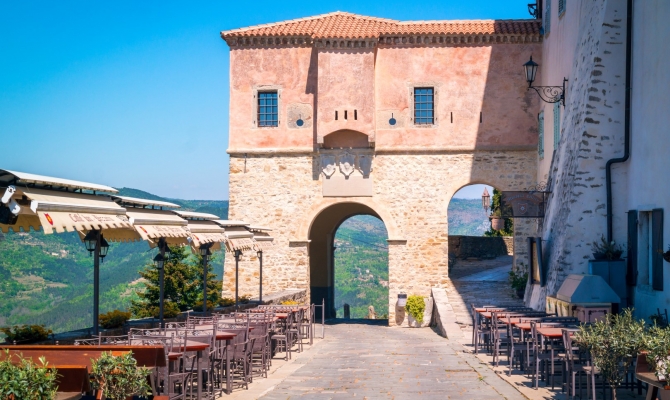 According to an inscription carved above its exit portal, the Tower, better known as the "New Gate", obtained its name following a reconstruction in 1607, during the government of the Podestà (magistrate) Marco Pasqualagio. The tower is linked to the Municipal Palace and, through it, to the walls of the citadel. Above the entrance and exit portals, former town gates, machicolations were inserted and used by the defenders to drop heavy objects on the attackers or to pour hot oil and boiling water on them.

The Josef Ressel Square hosts the loggia, under whose roof decisions were made public to the citizens, judges passed their judgments and generations of young Motovuners promenaded here at the sunset exchanging their first shy love glances. The Motovun Loggia was first mentioned as a public facility in 1331 under the name "Lobia Maior". However, it is not known whether it was located in the location of the existing Loggia, built in the 17th century. 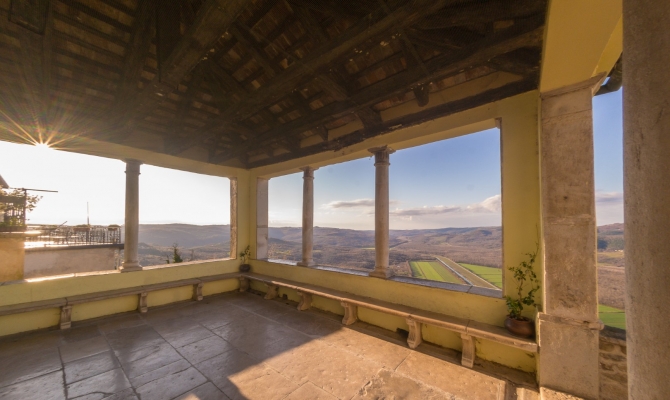 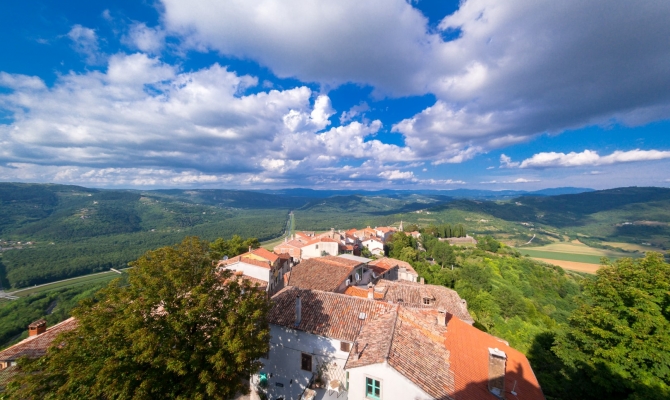 Just before entering the historical centre of the town, there is the graveyard of the Church of St. Margaret. This area of the town is called Gradiziol, and developed in its suburban shape in the 14th and 15th centuries as a suburb. Gradiziol was accessed through a gate which was located at the beginning of the present-day street. The northern access to the suburb was protected by a row of tall, partly fortified houses, and the southern part was protected by a wall with a moat. The modern features of Gradiziol were built in the 18th century, with minor building interventions in the 19th century.

Church of the Blessed Virgin Mary

The entrance into Gradiziol is marked by the Servite Church of the Blessed Virgin Mary. The church is part of a convent built in the 16th century by the "Order of the Servants of the Blessed Virgin Mary", better known as Servites. The Servites built their convent next to the church in 1595 and remained there until 1790. The 15-meter tall bell tower was built near the church in 1749. The church floor contains a number of tombs that belonged to wealthy Motovun families. 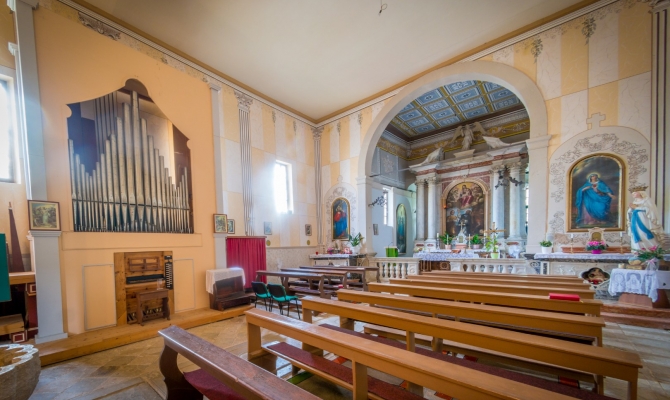 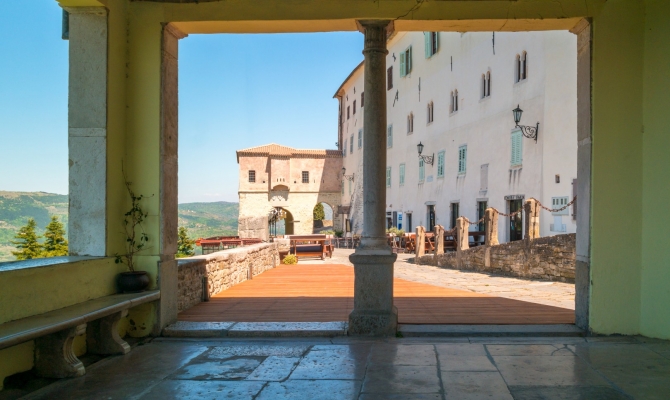 The platform of the Josef Ressel Square was erected on an embankment between the Municipal palace and the tall wall of the second circle of the town walls. Today it is a beautiful viewpoint and a unique terrace. This area used to be a crucial point in the Motovun fortification system as it connects the barbican with the suburb, the Borgo, and the most important Motovun gates, the one leading to the citadel, the oldest part of the town.

The main Town Gate leads from the lower square to the citadel – the oldest part of the town. The gate’s vaulted opening opens into the “upper square”. This mighty gate and its tall tower, built in the 16th century, offered safety to the citizens and impeded entrance into the town to possible assailants. Peasants arriving from the surrounding villages, clunking with their clogs up this vaulted passage, were impressed by its awe and the importance and power of the gentry who lived in the citadel. 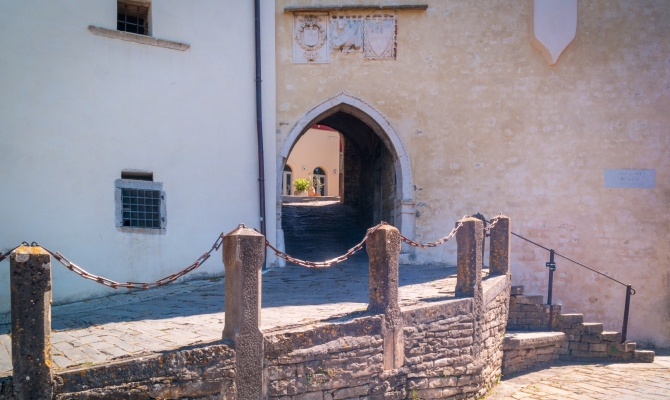 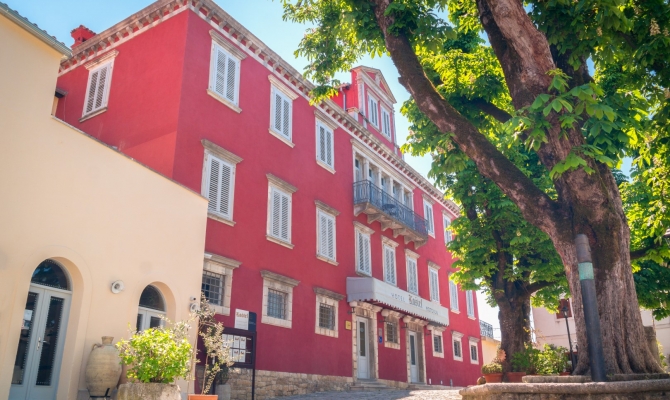 The Polesini Palace dates from the 18th century. The Palace was home to the wealthiest patrician family in Motovun who managed large complexes of fertile land around Zamask, Motovunski Novaki and Poreč. In the 18th century the Polesini family were bestowed with the title of Marquis and the family produced numerous notable persons and intellectuals.

The Borgo suburb developed in the 14th century and by the 17th century it had already been encompassed by the walls of which only some fragments and the "Gothic Gate" close by the Church of St. John the Baptist and the Blessed Virgin Mary 'of the Gate' have been preserved until today. The street leading down through the Borgo is lined on both sides by an almost uninterrupted row of mostly residential buildings. Apart from residential buildings, the Borgo features the Church of St. Anthony of Padua and St. Cyprian, an almshouse or a hospice. 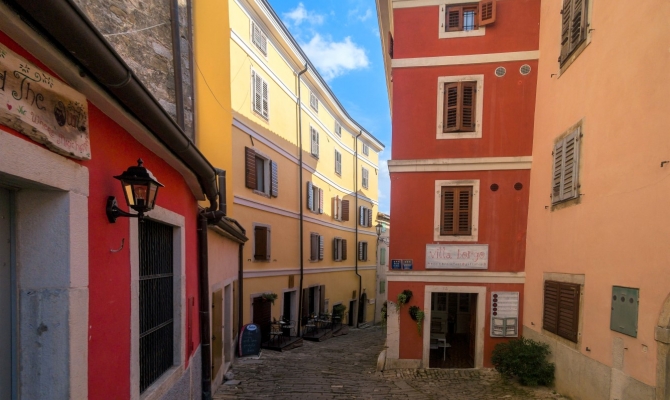 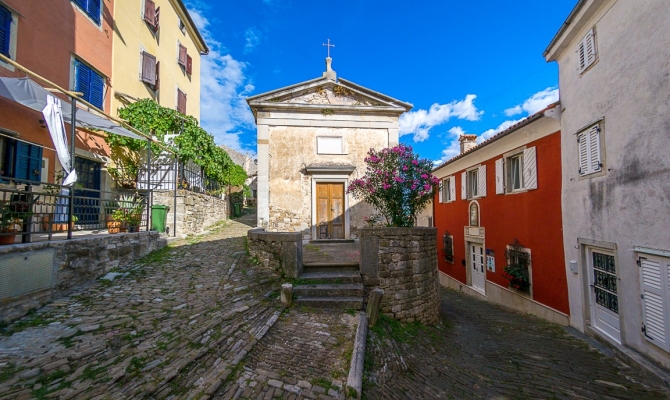 Church of St.Anthony of Padua and St.Cyprian

The Church of St. Anthony of Padua was earlier dedicated to St. Cyprian and as such it was mentioned as early as 1454. The church, built in the 15th century at the side of a tower and gates which connected the Borgo with the barbican, was thoroughly reconstructed thanks to votive offerings for protection against an outbreak of plague in the mid 19th century. Saint Cyprian is considered to be protector from the plague and for this reason it is understandable why a church dedicated to him was built at the entrance into the town, with the obvious intention of the builders to prevent this atrocious disease from entering and spreading in the town.

The almshouse or the hospice had already existed in Motovun in the Middle Ages, with a physician and a pharmacist operating in the town as early as 1331. It is not known whether the physician operated from the hospice. However, there is evidence that the hospice, reconstructed in 1622, was administered by a physician who, together with a surgeon, was paid by the town. In general, the users of the hospice, the homeless, would beg around the town and the surroundings, using the hospice to spend the night and prepare food they had begged. 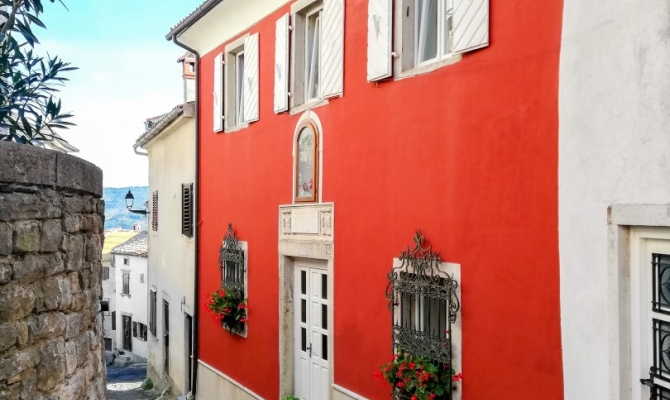 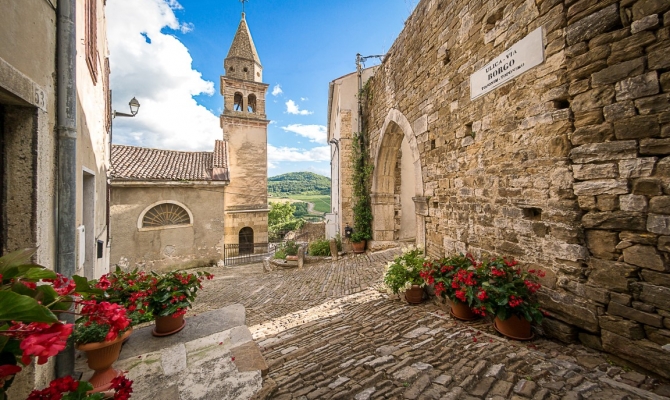 Church of St.John the Baptist and Blessed Virgin Mary 'of the Gate'

The church was erected in 1521 to replace a pre-existing church outside the town walls, at the entrance into the Borgo, in front of the Gothic gate. The 15-meter tall bell tower was added to it in the 1898. The central part of the church contains an altar with a stairway and a painting of the Madonna and Child which, according to a legend, appeared here on a fig tree, just like Zacchaeus who climbed a fig tree in the Bible.

Composer, publisher, editor and printer Andrea Antico was born in Motovun in c. 1480 and died in Venice after 1540. Andrea spent most of his life in Venice and Rome, where he proved successful in many fields. History records him as the oldest known composer of the modern-day Slavic world to have his compositions printed.

Josef Ressel, a forester and inventor, was born on 29 June 1793 in Chrudim, Czech Republic, and died on 9 October 1857 in Ljubljana. He lived and worked in Motovun from 1835 to 1843. He gained fame for having conducted the first successful tests of the ship propeller. In addition to the ship propeller, he left about thirty other inventions in various fields of technology. He played an important role in the Austrian Navy as a forester in charge of securing a supply of quality wood from the Forest of Motovun to be used in shipbuilding.

Vladimir Nazor (1876 – 1949) made Motovun famous by his allegoric tale "Veli Jože" (Big Joe). The book was published in 1908 and soon became so popular that the giant Veli Jože became and has remained the symbol of Motovun.

One of the greatest Croatian visual artists of the second half of the 20th century, he was living in his house in Motovun when he created the Croatian coat of arms and flag in 1990. 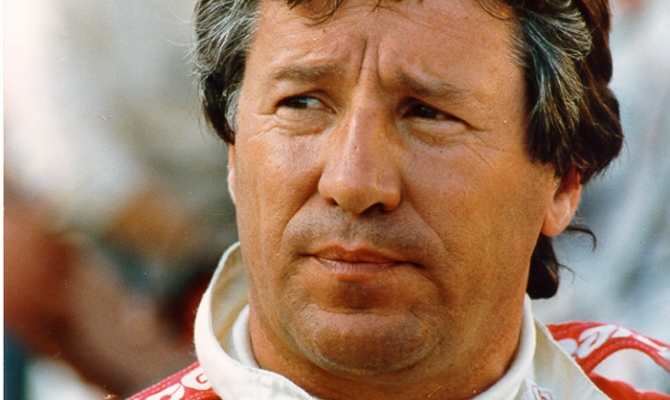